The Beatles, Gerry and the Pacemakers, Roy Orbison - 1963 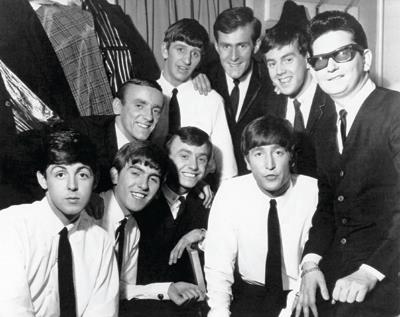 LOL! They do especially George!!! Maybe they were on prellies?

Everyone else looks high.

John's doing a kind of a duck face.

Cool Photo of the Beatles with Gerry & the Pacemakers and Roy Orbison from 1963! :-)

" We were selling records but we were still second on the bill, and one of our first big tours was second on the bill to Roy Orbison. It was pretty hard to keep up with that man. He really put on a show; well, they all did, but Orbison had that fantastic voice.

Although Orbison was at the top of the bill, he was soon demoted to second place due to the audience reaction to The Beatles.

We soon took over as top of the bill. We had to come on after Roy. They had a trick in those theatres where they would close some of the curtains on the stage so we could set up behind them while the other bloke was still out there doing his tunes. I can't remember where his backing group was, but Roy would be out there every night and at the end he'd be singing, 'She's walking back to me, do do do do da do do-do...' And the audience would go wild. We'd be waiting there and he'd do another big encore and we'd be thinking, 'How are we going to follow this?' It was really serious stuff."

Orbison had a great influence on contemporary artists as The Beatles and The Rolling Stones. The Beatles were fans of Roy, and as early as the very first radio program they participated in, Teenagers Turn, recorded on March 8 1962 with Pete Best on drums, the group performed the song "Dream Baby" with Paul on vocals. The song was a brand new single with Roy, released only a month before The Beatles did their version of it. In 1960 the song "Down The Line" (Orbison-Price) was part of The Beatles repertoire. John Lennon mentioned Orbison as the source of inspiration for both "Please Please Me" and "(Just Like) Starting Over", and Roy was his all-time favorite singer.
During the UK tour of 1963, Orbison encouraged The Beatles to come to the States. When they later were on their first U.S. tour in the summer of 1964 they tried to get Orbison as a support act again, but he had other engagements.
;-)