A very sad day for the passing of Monkee Davy Jones :(

Even though Davy is gone, cheer up, sleepy jean. Let's dedicate this thread to anything Monkees!

Here is a recent video of Paul and the crew singing the Monkees' theme song:

Permalink Reply by Annalina Lennon McCartney on February 29, 2012 at 7:30pm

First off, I am very sad to hear about this! :( I truly am. Mainly because I was never really a Monkees fan, so losing someone who was a celebrated member of a popular Sixties band such as the Monkees made me feel like I lost the chance of knowing how it was to have 'Monkeemania'?... I admit, I was too busy admiring The Beatles/Paul and dealing with my depression to keep up with anything Monkees. I just found out that Davy performed in NYC about less than 2 weeks ago. I could have went there to see an iconic Sixties & Seventies hearththrob. He had more tour dates on his calendar. I had my chance, but I can't blame myself for not having a time-machine or money to see people that used to be celebrated because of their talents. I don't want to make this all about me, but I really don't know much about Davy, except the first time I heard of his name was when I was around 9 and used to watch "The Brady Bunch" and he happened to be a guest star there. I also know that his mother invented what we used to use a lot before backspace that we call "white-out". Marcia was absolutely head-over-heels with him, so that gave me the idea of what kind of character Davy portrayed.

From what I read, Davy played the "Paul McCartney" of the Monkees - the guy in the band that girls gushed on about. Wikipedia says that the creators of the "Monkees" vision was inspired by the film A Hard Day's Night. No wonder it's so easy for Beatles fan girls to monkee around and pick which one's their favorite.

Though oddly enough, just a few days ago, I came around a song that I've loved since I was 16 called "Different Drum", the version of Linda Ronstadt which I love best, was written by Mike Nesmith of the Monkees. Was it a sign? Today, I also felt different - something strange and wrong. I couldn't tell because I always have the blues now and then, but now I can find a reason why.

Davy was 66 years old and died from a heart attack in his sleep in his home in Florida. R.I.P. Davy Jones, we will miss you.

Here is a heartfelt letter from Carl Giammarese of The Buckinghams.

From that alone, Davy did what he loved best - to entertain, and that he did. He was a jokester, as well...Goodbye, Buddy.

Permalink Reply by Annalina Lennon McCartney on February 29, 2012 at 8:29pm

Haha, I've made a "Badfinger Documentary" post before, so yeah, why not! :) You can go Who crazy and make a post on them! You have the whonors :P

I love 60s music as well! Thanks Davy for being part of the Monkees, even though it's like a rip-off of The Beatles lol.

George Harrison said in an interview that everyone copies off each other. Even The Beatles copied off other musicians.

Here is a clip of that interview:

Here is the banned Pizza Hut commercial with Ringo and The Monkees!

The Monkees weren't the only one who ripped off The Beatles! I can name about 100 other bands/songs from the 60s that were Beatle copy cats! haha.

Permalink Reply by Annalina Lennon McCartney on February 29, 2012 at 8:38pm

Every new boy band today that gets popular today just because girls scream for them gets compared to The Beatles lol and if they can harmonize, they also get compared to The Beach Boys. No one compares them to the Monkees though. How ironic!

(Example: Ellen compared the Jonas Brothers to The Beatles because girls screamed for them. The JB had a TV SHOW!!! on the Disney Channel called 'Jonas'. But no one thought to compare them to being like The Monkees, which would make tons more sense.)

Permalink Reply by Annalina Lennon McCartney on March 1, 2012 at 6:40pm

Ooookay, so I told my friend how I was so sad that Davy Jones had passed away, and he was like, "Davy Who?"

I said, "He was a singer and an actor"

Me elaborating: "He was a member of the Monkees""

Him: "Ohh, from the Monkees! They're a Beatles tribute band, I know about them."

Then I was sad today because I was reading about recently extinct animals.

Me: "I wish there won't be any turtles that are on the endangered species list! :("

He said: "Yeah, yeah, yeah, Turtles, Monkeys, and Beetles, they're all endangered nowadays"

LOL I love 60s band names as much as 60s music! And The Sixties are not endangered today to the few groovy people like us who can't live completely in 2012! :D

I'm happy that Micky Dolenz attended BeatleFest to talk about his Monkee days and of his old pal Davy :)

I read that the money he made from signing autographs were partially donated to a Multiple Sclerosis foundation, so that's nice of him.

Here is a video of Micky performing "Day Dream Believer"

I'm turning into a Monkeemaniac lately!!

and I'm daydreamin' about Davy! *sigh*

Sorry, I know it's kind of wrong right now but I just can't help it!

He's another one of my dead crushes!

(Shut up Ann, you got the hots for Ben Orr!)

Permalink Reply by Annalina Lennon McCartney on April 1, 2012 at 3:08pm

Announcement: Due to the circumstances that not many people post to this site and with a new Beatles Social Site (which proves to be more active) we are going through an undergoing change to make this site MONKEE-LAND! 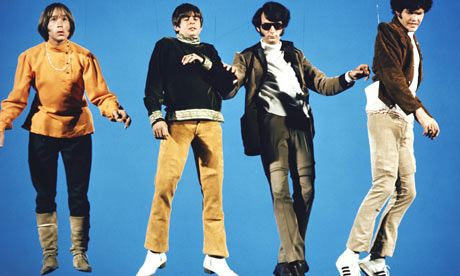 LOL it was just an April Fools Day joke that this site was going to become a Monkees site. HAHA @ all you daydream believers!

Permalink Reply by Annalina Lennon McCartney on April 5, 2012 at 4:53am

Here is a tribute Micky and Peter held for Davy... in NYC where he was supposed to play again.

Two members of the Monkees were among those who celebrated the life of Davy Jones in a special memorial concert yesterday at B.B. King's in New York City.

Both Monkees Peter Tork and Micky Dolenz attended and sang as part of the four-hour shows. Also participating in the show were Tommy James, Richard Marx, Gene Cornish of the Rascals, Deena Martin and members of Davy Jones' band. Two of Davy Jones' daughters, Annabel and Talia, were also  in attendance. Cousin Brucie of Sirius/XM emceed the event.

But I have actually been happy after he died, as strange as it sounds, his death gave me new interest in him & The Monkees and that's made me super happy, and I know he wouldn't want me or anyone to feel bad over him! So cheer up sleepy Jean! :)